Dwayne Smith had helped Chennai get off to a good start.

Dwayne Smith has been dismissed by Imran Tahir in the Indian Premier League (IPL) 2015 encounter between Delhi Daredevils and the Chennai Super Kings. Smith holed out to the deep as Tahir pitched one short and he found the man in the deep at mid-wicket. Tahir is a good bowling option for Delhi and he has delivered for them.  Live Scorecard: Chennai Super Kings (CSK) vs Delhi Daredevils (DD), IPL 2015 Match 2

Smith had started very well for the CHennai Super Kings and had moved to 34. However, Delhi have managed to pull things back a touch with a few wickets at regular intervals. That has been one big factor in the rate slowing down. However, there is Faf du Plessis in the middle and he is looking in very threatening form for Chennai.  Live Updates: Chennai Super Kings (CSK) vs Delhi Daredevils (DD), IPL 2015 Match 2

Earlier, Delhi had won the toss and chosen to bowl first. Brendon McCullum was dismissed early by Nathan Coulter-Nile. Thereafter, Smith played well, but then it was Delhi who managed to take a few wickets. Ravindra Jadeja has walked out to bat.  Chennai Super Kings (CSK) in IPL 2015: Kings of consistency look to rule again 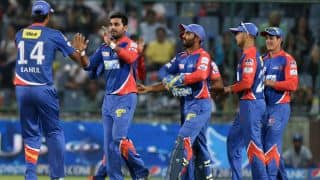 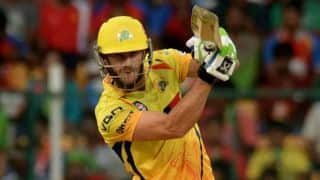