Despite the fixture being Kolkata's home game, the Ranchi crowd is expected to be behind local boy, Dhoni.

The Indian Premier League (IPL) 2014 moves back to India with the Chennai Super Kings (CSK) taking on the Kolkata Knight Riders (KKR) at Ranchi. This is Kolkata’s home but, only technically. But, if you ask the fans, they would be rooting for the other side for their most famous citizen is leading the Chennai Super Kings. MS Dhoni would be the biggest talk of the town when this game gets underway and when compared to Kolkata, Chennai do have more experience here as they played a few games of the Champions League T20 2013.

With the matches coming back to India, it remains to be seen how much it affects the teams. At least for now, one would expect them to line-up their best performers and avoid making too many changes. Also, spin should be a bigger factor here in India.

Chennai have a settled unit after they bounced back following the defeat in the first game. In Dwayne Smith and Brendon McCullum, they have an attacking opening pair that can tear any opposition apart. Also, there is the strong middle in Suresh Raina, Faf du Plessis, Dhoni and Ravindra Jadeja in the mix. Smith in particular is in good form and has helped set-up games for Chennai.

In these conditions, Ravichandran Ashwin and Jadeja may be able to do a much better job as wickets would be slower and they would feel more at home. And, Ben Hilfenhaus, Ishwar Pandey and Mohit Sharma would continue to hone the pace bowling duties.

Kolkata have questions over their batting, which has big names, but hasn’t clicked. Gautam Gambhir finally got a few runs and needs to convert them into big knocks. At the same time, they need Robin Uthappa to click. Suryakumar Yadav has been a revelation this year and could be persisted with on a higher batting slot. Jacques Kallis and Manish Pandey started the tournament well but haven’t maintained their form.

Yusuf Pathan found himself out of the Kolkata side for the first time and they may continue to keep him out. Shakib Al Hasan adds value to the side with his all-round abilities and was responsible for Kolkata’s comeback in the last game. In the bowling, Sunil Narine and Morne Morkel are the key figures and the trumpcards.

A lot would depend on how well Shakib and Narine combine as they can tie down the opposition in the slower surfaces. That is where, their contest with Smith would be crucial. 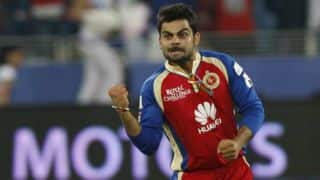