Former champions, Chennai Super Kings (CSK) take on the powerhouse, Royal Challengers Bangalore (RCB) in Match 37 of the 2015 Indian Premier League (IPL) at the MA Chidambaram Stadium in Chepauk, Chennai on Monday. It’s a battle of the second versus the third as both the teams would fight out for the top spot. LIVE Scorecard: Chennai Super Kings vs Royal Challengers Bangalore

CSK are still perched at the top of the table but they’ll be eager to get back to winning ways after facing two consecutive defeats. For RCB, a win is more significant with more than just pride at stake. Victory in the match will make them top contenders for a spot in the top four. They have the fire power to topple any side, and if they play to their potential, CSK will have a tough time arresting their progress. LIVE Updates: Chennai Super Kings vs Royal Challengers Bangalore

Catch the live telecast of the Chennai Super Kings vs Royal Challengers Bangalore match on Sony Six and Sony Six HD for English and Set Max for Hindi commentary. The live streaming of the match is available on starsports.com.

There are many websites on the internet that promise live streaming of cricket matches, and those fans who frantically look for the links on the internet often end up on links that are objectionable. They need to be aware of the official platforms. IPL 2015: Complete Coverage 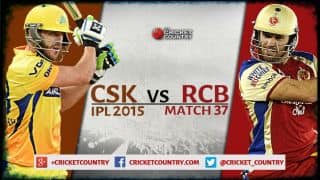