Chennai won by 7 wkts
Man of the Match: Pawan Negi

Mohali: Table-toppers Chennai Super Kings (CSK) coach Stephen Fleming sees his side’s final IPL league match against bottom placed Kings XI Punjab (KXIP) tomorrow as a “hard game”, saying they would be up against a team with “no fear attitude”. CSK are presently leading the eight-team points table with 16 points from eight wins out of 13 games, and a victory here tomorrow would guarantee their place in the top two.

“It will be a hard game for us (tomorrow) because they (KXIP) have no fear attitude and some of their players dangerous at the best of times. But we will just go about our work the same way and hopefully, we can get the result in favour which will be a big advantage going into the finals,” Fleming said ahead of tomorrow’s match. “We are delighted to have qualified, that is your first goal when you start the season. So we are delighted with that,” he said.

Asked to comment about the competition being still wide open among top six teams, bucking the earlier trend when top three positions were settled at this stage, Fleming said, “I think it has happened before a few years but last couple of years were bit different … the fact that six teams are still in the running is a good sign.

“This year has been very even, the fact that we were beaten by Delhi in the last game, who were perceived to be the weakest team just shows that there is a fine line between each of the teams and its down to individual form,” said Fleming.

“Having key players in form at the right time and winning key moments. We have seen games all the way through that are won or lost on one shot or one bye or one bad play, so its very tight. I think the fans have to be enjoying the fact that so many teams are in contention.” Asked if it’s dangerous to play KXIP as the home side has nothing to lose in the final league game, he said, “It is dangerous, very dangerous.”

“I guess we have got nothing to lose because we are through, so we can adopt that (no fear) attitude, but we do want to qualify and finish the round robin well. We were poor in the last game and Delhi played well, we weren’t as good as we could be, so we have got some questions to answer before we head for the finals.” He said opener Brendon McCullum will be available for tomorrow’s game before he heads for England. 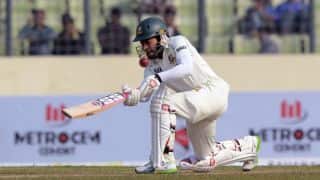