Before Pujara, Motganhalli Jaisimha and Ravi Shastri have batted on all five days in a Test.

Cheteshwar Pujara, on Monday, joined a unique list, becoming only the third Indian cricketer to have batted on all five days of a Test match. Pujara, who was the only half-centurion of India’s first innings, came to the crease on Day One and carried his bat on Day Two. He was dismissed soon after scoring his half-century on Day Three. India’s innings came to an end on that day. On Day Four, India bundled Sri Lanka and batted again. After a solid opening partnership, Shikhar Dhawan departed scoring 94; the fall of wicket brought Pujara to the field. He remained unbeaten before stumps and resumed batting on Day Five to achieve this feat.

Before Pujara, Motganhalli Jaisimha and Ravi Shastri had batted on all five days in a Test. Jaisimha did it against Australia in 1960, while Shastri played against England in 1984. Coincidentally, all the three instances took place at the iconic Eden Gardens Stadium, Kolkata. Overall, Pujara becomes the ninth cricketer in the history to do this.

In a rain-affected Test, India were restricted to 172. Sri Lanka took a 122-run lead, putting up 294 runs in their innings. Batting again, at stumps of Day Four, India posted 171 for 1, leading by 49 runs, and are batting on Day Five. 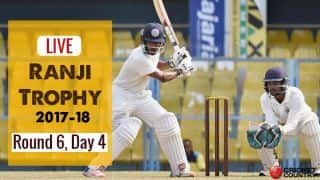