Indian fielding coach R Sridhar was all praise for Pujara and gave him credit to bat beautifully in any condition.

India have been off to a stuttering start in the opening Test against visitors Sri Lanka at the historic Eden Gardens Stadium in Kolkata. Although most of the play has so far been marred by rain, the conditions have certainly been difficult to bat on. The Lankans so far have taken good control of the situation, having claimed five wickets. However, it was India’s Mr Dependable Cheteshwar Pujara who has managed to hold the fort. Meanwhile, Indian fielding coach R Sridhar was all praise for Pujara and gave him credit for batting beautifully in any condition. FULL CRICKET SCORECARD: India vs Sri Lanka 2017-18, 1st Test at Eden Gardens

On Pujara’s ability to bat in any condition

“Pujara has got a grip of every condition when he goes in to bat. His gameplan was quite simple… play as close to your body and try to play straight. The standout feature was most of his runs went to the right of mid-off… he had a narrow V. It was probably one of the best 47 runs I have seen from Pujara,” said Sridhar during the post-day press conference. FULL CRICKET UPDATES: India vs Sri Lanka 2017-18, 1st Test at Eden Gardens, Day 2

“Pujara is a world class player. His innings shows the benefits of him playing county cricket. That is genuinely a wicket you would find in England during April-May and he certainly played in the conditions very well,” said Sri Lanka coach Nic Pothas during the post-day press conference. 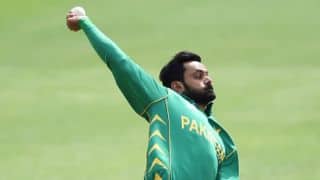