Cheteshwar Pujara stood tall amid the ruins of India's batting.

Cheteshwar Pujara stood tall amid the ruins of India’s batting, scoring a marvellous century to guide India to 220 for 7 against Sri Lanka at tea on Day Two of the third and final Test at Sinhalese Sports Club (SSC) Stadium, Colombo. Pujara absorbed the pressure like a sponge as the rest of India’s batting showed a lack of patience as Dhammika Prasad pegged away at the wickets. Pujara found an able ally in No. 9 Amit Mishra, who played positively to add 40 for the eighth wicket. Dhammika finished the session with four wickets, but he was able to go past Pujara’s bat on just a couple of occasions. Live cricket scorecard: India vs Sri Lanka, 3rd Test at Colombo (SSC)

Sri Lanka started the session brilliantly, with Dhammika trapping Stuart Binny LBW for a first-ball duck. Naman Ojha came in at No. 7 on Test debut and showed good technique in handling the bowling. Unlike Wriddhiman Saha, he looked in control from the start and looked quite positive. However, he let himself get lulled into a false sense of security, and ended up playing a needless hoick off Tharindu Kaushal to get caught at long on. Ravichandran Ashwin was unable to last long, edging Dhammika behind to give the pacer his fourth wicket. Mishra then came out to join Pujara, and the duo steadied the ship. They took India from a precarious 180 for 7 to 220 at tea, remaining unseparated. Live cricket updates: India vs Sri Lanka, 3rd Test at Colombo (SSC), Day 1

Earlier, Pujara offered a resounding reminder of his worth by clamping down and grinding out for the first hour and a half before cutting loose just before lunch. A wicket off the last ball of the session meant that India went to lunch at 119 for 4, with Pujara unbeaten on 55. Rohit Sharma, who came in at No. 5, looked good for his 26 before edging to Upul Tharanga off Dhammika Prasad off what proved to be the final ball before lunch.

Virat Kohli and Pujara saw off a trying morning spell from Prasad and Nuwan Pradeep, but the former fell off the first delivery bowled by Angelo Mathews. Kohli’s hard work was undone by a brief break in concentration, as he edged an innocuous delivery from Mathews to the wicketkeeper Kusal Perera for 18. Pujara — opening batting after Murali Vijay had to be left out due to injury — and Kohli added a round 50 before Kohli’s dismissal.

Pujara looked every bit “The Wall 2.0″ in the morning session. He left well and defended with soft hands, showing immense patience and concentration. He was stuck on 31 for a few overs, not finding a loose ball to score off. But the moment Tharindu Kaushal came on, Pujara took complete toll. The first ball was driven to cover for a boundary, the next was a short ball and cut to third man for another boundary, while the third was driven past point for the third in three balls. Pujara had gone from 36 to 44 in three balls, and later completed his fifty off the same bowler. Kaushal was eventually taken off after conceding 17 from his first two overs. READ: Cheteshwar Pujara faces big challenge ahead of India vs Sri Lanka 3rd Test at Colombo

Earlier, India were rocked early by Sri Lanka on Day One before Pujara and skipper Kohli took India to 50 for 2 at stumps as rain forced an early close to the day. Dhammika Prasad took the first wicket, getting KL Rahul out bowled in the very first over of the match. Rahul tried to leave the ball but it jagged in and broke the stumps. Ajinkya Rahane once again came in at No. 3 but was struck plumb in front off the bowling of Nuwan Pradeep. Angelo Mathews won the toss and elected to bowl. Wriddhiman Saha and Murali Vijay missed out for India with injuries, as Cheteshwar Pujara and debutant wicketkeeper-batsman Naman Ojha got a look-in. Sri Lanka brought back fast bowler Nuwan Pradeep in place of Dushmantha Chameera, and were forced to finally come to terms with Kumar Sangakkara’s retirement by bringing in Upul Tharanga in his place. They also replaced the under-performing Jehan Mubarak with Kusal Perera. READ: What to expect from the Virat Kohli era of Indian cricket! 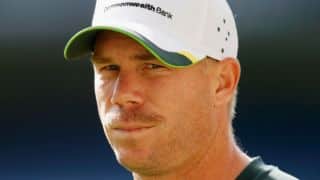