India's No 3 singled out Murali Vijay for his fine half-century on Day three.

Indian batsman Cheteshwar Pujara has said that his side will be looking at a 300-plus target for England in the second innings.

“Overall, if you see the match is evenly balanced. We just need to bat well tomorrow morning because the first session will be very crucial,” said Pujara after the day’s play.

“The wicket has begun to deteriorate a little bit. There is some uneven bounce and England will be batting last. So we are confident that we can get them out. But first, it is important for us to bat well tomorrow.”

Pujara had added 78 runs for the second wicket with Murali Vijay and India were in cruise mode when suddenly they lost 3 wickets for 5 runs in the space of 19 balls to squander their advantage.

Only a fine rearguard partnership between Vijay and skipper MS Dhoni saw them to safety at stumps. The opener was batting well with a calm unbeaten 59 runs under his belt.

“In Test cricket you should know your off-stump and Vijay has shown tremendous patience in leaving the balls in both Test matches so far. He has been batting brilliantly,” said Pujara, praising his partner.

When asked about his own run, wherein he has been getting starts but not making big scores, he replied,”At times you get good balls and you get out. But I am happy with the way I am batting. My effort is to help the team in whatever way I can.

But I should have left that ball today.”

India now have six wickets remaining and the final question that remains pertains to the target they can set for England in the fourth innings.

“I think 350 runs should be enough. Ideally anything above 300 can be defended in the fourth innings. The bounce is variable and when I was batting, some balls kept low and some were kicking. It is difficult to say what total we can defend but it won’t be easy for them,” said Pujara.

“Vijay and MS are batting well with Binny and Jadeja to come, and we cannot forget Bhuvneshwar as well. So, if we score runs, then we can do well,” he signed off. 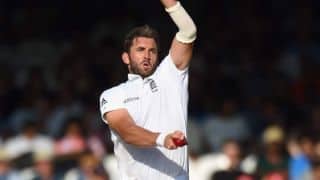