England batsman Kevin Pietersen feels the new set of Indian batsmen could prove heavy for England if the hosts slip up in their bowling. Pietersen marked Virat Kohli and Cheteshwar Pujara to succeed in this series.

In his column for The Telegraph, Pietersen said, “Cheteshwar Pujara, Virat Kohli, Murali Vijay, MS Dhoni and Ajinkya Rahane are gifted players and the pitches here are not the green seamers of old that tipped the balance in England’s favour. We saw recently how Kumar Sangakkara and Angelo Mathews felt at home batting on our pitches. Well, if you give Pujara half a chance to get in and bat for two days, either through either poor bowling or a benign surface, then he will take it and punish you.”

Pietersen particularly highlighted the threat of Pujara and Kohli who can decimate the England bowling. The maverick batsman stated that Pujara can slowly steal the game from England while Kohli devastate the opposition bowling.

Talking about Kohli, Pietersen said in his column, “Look at Kohli. He has already scored 19 one-day hundreds. No England batsman has got close to that and at 25 he still has at least 10 years left in the game. I know Kohli really well and he is a proper superstar. A great guy and I know how hungry he is for this series. From what we have seen so far this summer, the ball is not swinging for long.”

Highlighting Pujara’s abilities he added, “Pujara hurts you slowly but Kohli can devastate an attack. He is technically sound, he is experienced now and has the confidence of success. He is driven and always wants to learn. He is strong all around the wicket. He can play any shot. He is one of those gifted players who can hit the ball from third man all the way to fine leg with comfort.”

India begin their England campaign on July 9 with the first Test at Trent Bridge. It was a mixed outing for them in the tour matches as they drew with Leicestershire and won against Derbyshire. 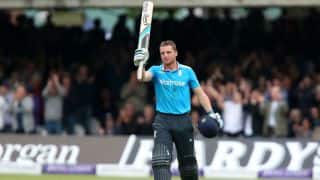 India vs England 2014: Jos Buttler called as cover for Matt Prior ahead of 1st Test