Cheteshwar Pujara took 54-balls to get off the mark in the first innings of Wanderers Test.

Cheteshwar Pujara has been India’s run machine in recent times. Known to be an accumulator of plenty, Pujara nearly missed an unwanted record in the ongoing Johannesburg Test between India and South Africa. Pujara took 54 balls to get off mark, only bettered by Rajesh Chauhan. Chauhan took 57 balls to get off the mark in Ahmedabad Test against Sri Lanka in 1994. Pujara at time of publishing this report is batting on 5 having faced 63 deliveries.

World record is held by England’s John Murray. He took 80 balls against Australia in Sydney Test in 1963.

Another interesting stat is that Pujara missed out on levelling or surpassing coach Ravi Shastri‘s record as well. Shastri batted for 68 consecutive deliveries without scoring a run at Johannesburg in 1992-93 series; he was on 9. Pujara batted for 53 consecutive balls without a run.

Pujara along with Virat Kohli (25) take India to lunch on Day 1 of the opening final Test placed at 45 for 2. 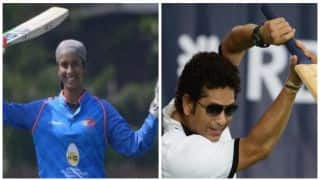 South African pacers restrict India to 45 for 2 at lunch on Day 1, 3rd Test