Pujara and Ashwin are placed sixth and eight in the batting and bowling charts.

Cheteshwar Pujara and Ravichandran Ashwin managed to remain the best-placed Indians by keeping their place inside the top-10 of the batting and bowling charts respectively and slipped a rung each in the latest International Cricket Council (ICC) Test rankings issued on Monday.

Pujara was placed sixth in the batting list while Ashwin was eighth amongst the bowlers after the opening Test against New Zealand which India lost by 40 runs.

Among other Indians, Virat Kohli remained steady at 11th in the batting rankings followed by Mahendra Singh Dhoni at the 33rd spot, a loss of five positions for the Indian skipper.   Rohit Sharma rose six rungs to be joint 36th.

Among the bowlers, Pragyan Ojha was the next best-placed Indian after Ashwin at 11th, though he slipped down two positions.   Pace spearhead Zaheer Khan was static at 22nd in the list.   Elsewhere, Kumar Sangakkara‘s historic effort of 424 runs in the second Test in Chittagong against Bangladesh saw him jump five places to second in the rankings for Test Batsmen.

Sangakkara rewrote history books with his knocks of 319 and 105 in either innings of the Chittagong Test. He became only the second player in history to score a triple hundred and hundred in the same Test. Overall, he became the fourth man in history to score 400 runs in one Test.   Sangakkara, named Player of the Match and Series, gained 58 ratings points for his effort. He is now three ratings points ahead of third-ranked Shivnarine Chanderpaul, and 33 behind number-one ranked AB de Villiers.

Meanwhile, New Zealand’s Ross Taylor was down to fifth in the latest rankings. Alongside Taylor, the latest entrants in the top 20 are Kane Williamson and Brendon McCullum, both of whom are centurions in the Auckland Test. Williamson, who stroked 113 in the first innings, jumped four places to a career-high of 19th.

McCullum has jumped 15 places to return to the top 20 following his knock of 224, which also earned him the Player of the Match award. McCullum now sits in 20th place.

New Zealand’s Trent Boult has risen three places to a career-best seventh in the rankings for Test Bowlers, following his match haul of six for 124. Boult’s pace partner, Tim Southee has made it to the top 10 for the first time in his career. Southee notched up six for 119 in the Test and now sits in 10th place on the table after gaining four places. 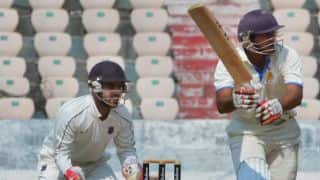