Cheteshwar Pujara scored a 113-ball 73 to help Saurashtra close to the 200-run mark.

Cheteshwar Pujara top-scores with 73 for Saurashtra in Vijay Hazare Trophy 2015-16 match against Himachal Pradesh in Rajkot. Pujara had managed just five runs in the two games in the tournament so far and will be happy to have gotten a good score. Saurashtra have managed just 195 in 48.4 Overs thanks to Pujara’s innings. Ravindra Jadeja however did not managed to get many runs on the board as he was dismissed for a 15-ball 9. It will be big task to restrict Himachal Pradesh to that low score, so Saurashtra will have to find a way to bowl the opposition out, which they very much capable of doing. Saurashtra have won both their matches in the tournament so far and sit on top of Group D at the moment. Full updates:  Vijay Hazare Trophy 2015-16, Himachal Pradesh vs Saurashtra Group D match at Rajkot

A comprehensive win for Himachal Pradesh might however take them to the No.1 position in the table. Himachal Pradesh have won just one out of the two matches. Pujara played all four Tests in the series against South Africa and got off to a good start in most of the innings he played in. He however scored just one half-century with the highest score of 77 coming at Mohali in the first Test.

Pujara’s teammate Jadeja too had a wonderful run in the Test series, where he finished as the second leading wicket-taker behind Ravichandran Ashwin. While Jadeja is a regular in India’s limited-overs setup, Pujara does not feature in it. The last One-Day International (ODI) Pujara played in was against Bangladesh at Dhaka well over a year back.

Sachin Tendulkar is the Indian sportsman who Roger Federer admires most 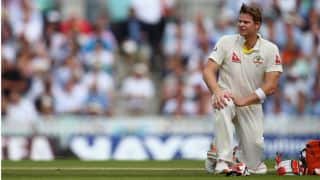