Chittagong Vikings (CHV) posted a strong total of 163 for 3 in their allotted 20 overs against Barisal Bulls (BB), in the 12th match of the ongoing Bangladesh Premier League (BPL) 2016.

Tamim was the star of the innings for Chittagong Vikings (CHV), who somehow squandered a chance to put up even more runs in the later stage of their innings. Tamim top-scored with 75 off 51 balls, smacked 10 boundaries and 2 sixes and added as many as 116 runs for the first wicket. Coming out to open the innings, the left-hander had no mercy on the Barisal Bulls bowlers as he began attacking them from the second over onwards, wherein he struck two boundaries off the Bangladeshi fast bowler Al-Amin Hossain. The other Chittagong Vikings (CHV) opener Mohammad Jahurul Islam was however restricted being the second-fiddle as he could manage only 36 off 34 balls with 4 boundaries.

The Chittagong Vikings (CHV) lost their first wicket in form of Tamim on the first ball of the 14th over, and this is where they lost the plot. Jahurul never got a move on, and the new batsmen Anamul Haque and Dwayne Smith could not carry on in the same passion as scoring at a brisk rate right after arriving in the middle was difficult.

Despite that, Anamul was able to strike a few big hits. He was given a lifeline when Anamul was batting on 13 by the Sri Lankan all-rounder Thisara Perera. Anamul had hit very high in the air and the Sri Lankan, standing at long on, spilled what could have been a regulation catch. Towards the end, Dwayne Smith played a handy innings of 17-ball 17 with the help of 2 boundaries and 1 six. Anamul remained unbeaten on 27 not out. 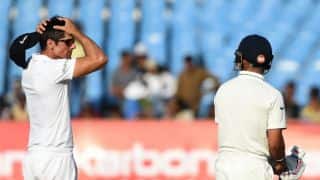