Chris Gayle was the star as Royal Challengers Bangalore put up a huge score against Kings XI Punjab in Match 40 of IPL 2015 at Bangalore.

Royal Challengers Bangalore (RCB) have put up a strong total against Kings XI Punjab (KXIP) in Match 40 of the eight edition of the Indian Premier League (IPL) 2015 at Bangalore. It was all thanks to the blitzkrieg from Chris Gayle which set the tone for them for a big score.

Gayle got the innings off to a flier when he went after Mitchell Johnson, taking him for 20 runs in Johnson’s very first over. He gave Kings XI Punjab a chance but George Bailey shelved that chance, Gayle was on 27 then. He made them pay racing away to his 19th IPL fifty in just 22 balls. And he had a lot of people following him, including the New Zealand opener Martin Guptill. Live updates: Royal Challengers Bangalore vs Kings XI Punjab Match 40 at Bangalore

Chris Gayle got a second chance when Manan Vohra dropped him when he was on 53. KXIP were clueless as Gayle went about his business. He was particularly severe on anything in his arc and he just swung his bat to get it over the ropes. Sandeep Sharma broke the 119-run stand when he castled Virat Kohli for 32(30).  Gayle though kept hitting sixes at will to get to his fifth IPL ton, his first one in two years. Live scorecard: Royal Challengers Bangalore vs Kings XI Punjab Match 40 at Bangalore

.@henrygayle reaches his #IPL ton off 46 balls. How big can he go? Watch on SS2 or follow here http://t.co/zhhHFdW4vj pic.twitter.com/NMLpd0Sjx4

AB de Villiers joined the fun with Gayle, he smashed Karanveer Singh for a three sixes in a row to signal his intent. RCB were 171 for the loss of one wicket at the end of 15 overs, also raising their 50-run stand in just 22 balls. Kings XI Punjab though heaved a huge sigh of relief when Axar Patel dismissed Gayle caught and bowled but not before he had amassed 117 runs in just 57 balls, hitting seven fours and 12 sixes.

Dinesh Karthik did not last long and was out bowled trying to go for quick runs. Sarfaraz Khan also chipped in with a couple of dinky hits to the fence. AB de Villiers just missed out on scoring his 15th IPL fifty as Royal Challengers Bangalore finished with a score of  226 for three in 20 overs. de Villiers was not deterred by the wickets and kept finding the fence with regular hits. Shouldn’t Indian cricketers be allowed to play in overseas domestic T20 leagues?

Kings XI Punjab have the huge task on their hands and they will really need all of their batting to click to have a chance today. Sandeep Sharma was the pick of the bowlers taking two for 41 in his four overs. Royal Challengers Bangalore will back themselves to win this and win big, which will also boost their run-rate. 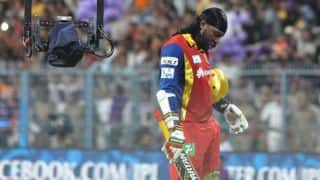 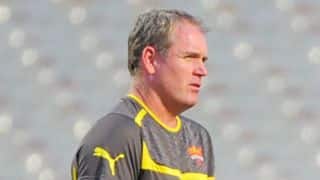