Chris Gayle feels MS Dhoni will only step aside when he feels like, no one can tell him to leave.

New Delhi: Wading into the raging debate over whether MS Dhoni should step aside from captaincy, West Indies batting superstar Chris Gayle has thrown his weight behind the Indian limited-overs skipper, saying that he will only take that call if he desires to do so. Calls for Dhoni to hand over the reins of the limited-overs formats to Virat Kohli began to gain strength following the latter’s continuing success as Test skipper. The explosive batsman, however, believes that Dhoni still has the potential to take India to greater heights. “MS Dhoni will only step aside when he feels like, no one can tell him to leave,” Gayle told ANI in an exclusive interview. READ: Chris Gayle: Started enjoying life after heart surgery

Commenting on the possibility of his return to the traditional five-day format, the 36-year-old southpaw insisted that “I will be looking to comeback to play in the 50-over and Test matches. That is definitely on the cards.”

Gayle, who has proven his ability to bat long periods with two triple hundreds, also described his 333-run knock against Sri Lanka in Galle as the most memorable day of his career. Talking about his recently released autobiography ‘Six Machine’, the flamboyant batsman said that the book will shed light on his hardships before he established himself as one of the batting stalwarts in the world of cricket. READ: Chris Gayle launches autobiography ‘Six Machine’ in Delhi

“It is a simple book depicting my life experiences & some of my good innings. Hopefully this book can inspire people around the world. I have been receiving great feedback from cricketers,” he said. 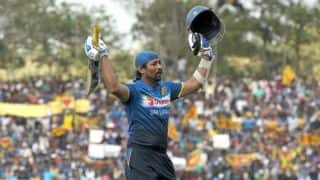