Chris Gayle’s belligerent 46-ball 80 powered West Indies to a 10-wicket win over New Zealand in the second Test at the Queen’s Park Oval in Port of Spain, Trinidad. ‘Gayle storm’ helped West Indies chase down a paltry 93-run target in only 13.2 overs on Day Five of the Test. This has allowed West Indies to level the three-match series at 1-1. Kraigg Brathwaite was a mere spectator with a 34-ball 14.

After the West Indies had bowled New Zealand out for 331 in the second innings on the morning session of Day Five, rain descended and play had to be stopped for more than one and a half hours. When play resumed in the post-lunch session, Gayle and Brathwaite began the run-chase. The result was never in doubt as Gayle hammered seven fours and six sixes.

His half-century was the joint-sixth fastest in Test cricket. He also scored the joint-second fastest fifty by a West Indies batsman. New Zealand won the first Test and now West Indies have sealed a comfortable win in the second. There is one Test still remaining as the series is now poised at 1-1.

The afternoon session began with West Indies needing 93 runs to win the Test match. Tim Southee opened the bowling for New Zealand. The first ball of the run-chase was flicked by Gayle for a four through mid-wicket. That showed the mood Gayle was in and also set the tone for what was to come.

Trent Boult shared the new ball with Southee. He bowled a full delivery and Gayle hit the ball over mid-wicket for another four. Gayle then chiped one from Southee over mid-on for his third four. A few deliveries later, he flicked one off the pads over mid-wicket for his fourth four. The lucks was in Gayle’s favour as he came down the track and tried to smother one from Southee. He only got a thick outside edge, but the ball went over the slips for a four.

Boult then bowled a length delivery and Gayle smashed the ball down the ground for a six. Boult bowled one short and wide outside off-stump. Gayle moved to the leg side and flat-batted the ball over long-off for his second six. Gayle again moved to the leg side for the next ball and then flat-batted a length delivery over long-off for another six.

Ish Sodhi was brought into the attack. His first ball was a low full-toss and Gayle smashed the ball over long-on for a six. That was his half-century off only 28 deliveries. It was the joint-sixth fastest fifty in Test cricket. It was also the second fastest fifty by a West Indies batsman in Test cricket.

Mark Craig was brought into the attack and Gayle greeted him with a six over deep extra-cover. Brathwaite finally decided to get some boundaries before there were no runs left to score. He played a classical cover drive to a tossed up delivery from Sodhi and got a four. Gayle then hit one from Craig towards wide long-on for a four.

Kane Williamson came into bowl the 14th over. The second delivery was short and wide and Gayle cut the ball in front of the short third-man fielder for a four. That was the end of the match. West Indies won by 10 wickets. The series was tied at 1-1 with one more Test still left to play. Brathwaite was the Man of the Match for his 129 off 258 deliveries in the West Indies first innings.

Man of the Match: Kraigg Brathwaite 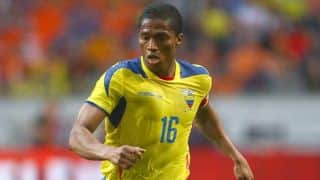