Chris Gayle calls himself the GOAT

Chris Gayle calls himself the GOAT

Chris Gayle is the first batsmen to surpass the 11,000-T20 run barrier.

Who among Virat Kohli, Joe Root, Steven Smith and Kane Williamson is the greatest player in modern-day cricket? Amidst this debate, Chris Gayle has declared himself as the greatest of all time (GOAT), even ahead of Sir Donald Bradman.

Gayle starred during Rangpur Riders maiden Bangladesh Premier League (BPL) title on Sunday, scoring a 69-ball 146* against Dhaka Dynamites. Answering a question about being labelled as Bradman of T20 cricket, Gayle claimed, I m the greatest batsman of all time.”

He further went on to term his fifth BPL hundred as one of his best; it included 18 sixes, a T20 world record. Gayle said: I would put it in the top five, certainly for the occasion as well. I will have to reflect where this takes place. It is right up there .

Gayle added 201 runs with Brendon McCullum for the second wicket.

On his stand with McCullum

It was important for one of us to bat right through the innings. It actually set the momentum for us . 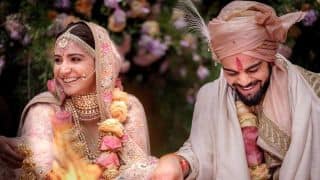 How much did Anushka Sharma's wedding ring cost Virat Kohli