"It was superb to be part of the IPL once more. It is the best tournament in the world."

Chris Gayle was picked in the final round of IPL 2018 auction by Kings XI Punjab, and was left out of the XI in the initial stages. Gayle went off to a power start once he was picked but failed to carry on the momentum. He scored 229 in his first 3 innings but his last 8 amounted to a mere 139. In an interview with Mumbai Mirror, Gayle opened up about his quote about how Virender Sehwag had done IPL a favour by picking Gayle: “It was not a joke, I am serious. You have said IPL needs stars and you have answered the question. I have done so much for the IPL. You look back and see what I have done for the IPL. I had two centuries and won a trophy, still active and playing. You can still see what I have to offer to the game. I love to continue playing in India. This is where a lot of passion lies. There is some fuel in the tank.

“It was superb to be part of the IPL once more. It is the best tournament in the world. I played for a new franchise, the reception there was fantastic. We had a good start but we lost the momentum in the final stages. Hopefully next year.”

Gayle also spoke on his late selection in the auction: “I have no idea. Maybe it is because of my age. How old is [Shane] Watson? He has scored two centuries. I am 39 and still scoring hundreds.

“SunRisers got into the final with their bowling attack and one would have expected them to defend that sort of total (178). But they were hit by Shane Watson, he played a magnificent innings. That is what you call a big match player, it was a big match.”

Gayle also talked about West Indies having to play the Qualifiers to make it to the 2019 World Cup, alongside Afghanistan: “The youngsters are coming up. We’re in a rebuilding process. It is going to take a while, it is not going to be over overnight. We’ve lost a lot of experienced players but life goes on. No player is going to play forever. At some stage, everybody has to depart the game. I will continue to wish West Indies cricket all the best.” “Who is Ian Chappell?” Chris Gayle 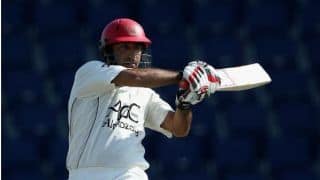