Chris Gayle completed his half-century during the Indian Premier League (IPL) 2015 match between RCB and KKR.

Chris Gayle completed his half-century during the Indian Premier League (IPL) 2015 match between Royal Challengers Bangalore (RCB) and the Kolkata Knight Riders (RCB) on Saturday. However, Darren Sammy was dismissed immediately after that as RCB continued to struggle with the bat.  LIVE UPDATES: Kolkata Knight Riders vs Royal Challengers Bangalore

Royal Challengers Bangalore were 119 for five after 15 overs, needing another 59 runs to win from 30 balls with five wickets in hand. Gayle remains RCB’s biggest hope as Sean Abbott has joined him in the middle. Virat Kohli dismissed for 13 against KKR in Match 5 of IPL 2015

This was after Royal Challengers Bangalore (RCB) stumbled once again when they lost their key batsman AB de Villiers for 28, during their chase of 178 against the Kolkata Knight Riders (KKR) in their Indian Premier League (IPL) 2015 at the Eden Gardens on Saturday. Yusuf Pathan double strike has RCB in trouble in IPL 2015

De Villiers slammed four boundaries and two sixes and faced 13 balls to score 28, hinting that he is in good form. The right-handed batsman was stumped off the Kolkata spinner KC Cariappa, who is playing his first match in the IPL for KKR. 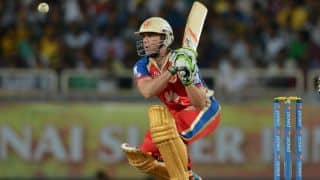 KKR vs RCB in IPL 2015: AB de Villiers falls for 28 as Bangalore stumble 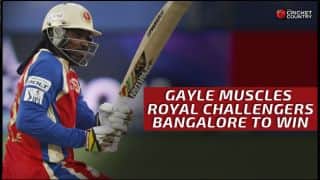