Currently, RCB are 25 for the loss of a wicket in four overs against KKR in IPL 2016.

Hosts and powerhouse Royal challengers Bangalore (RCB) explosive opener Chris Gayle was dismissed for mere seven by fast bowler Morne Morkel, after being caught by Robin Uthappa, in Match 30 of the ongoing of the ongoing Indian Premier League (IPL) 2016 at the M Chinnaswamy Stadium in Bengaluru on Monday. It was a short ball from Mrkel, as Gayled went for a hook and pull, possibly over the keeper, but instead the ball took the top edge to fly high in the air, and only for Robin to complete an easy take. Currently, RCB are 25 for the loss of a wicket in four overs, with opener KL Rahul on seven and skipper Virat Kohli on 10. FULL CRICKET SCORECARD: Royal Challengers Bangalore vs Kolkata Knight Riders, IPL 2016, Match 30 at Bengaluru

Following a series of losses, hosts Royal Challengers Bangalore (RCB) take on former champions and visitors Kolkata Knight Riders (KKR), in Match 30 of the ongoing Indian Premier League (IPL) 2016, at the M Chinnaswamy Stadium in Bengaluru on Monday. Both the teams are coming off a series of losses and aim to bounce back with a win in this tie. Although the league table tells a different story for both the teams, as KKR are third in the table, while RCB are seventh; a win for either team would boost their chances and putting them in contention for making it to the play-offs. FULL CRICKET UPDATES: Royal Challengers Bangalore vs Kolkata Knight Riders, IPL 2016, Match 30 at Bengaluru

RCB are coming off a 15-run loss, they suffered at the hand of Sunrisers Hyderabad (SRH) in an away tie, whom they already beat in their home tie, which was a high-scoring encounter; while KKR, on the other hand, lost another high-scoring thriller to Delhi Daredevils in an away tie, after they beat him in the home tie, in their opening game of the tournament. Considering their performance in the previous tie, both the teams put up a fair performance, but not good enough for a win. 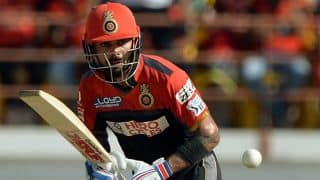