Gayle, who might have been given out lbw before he had scored, brought up his first double century.

Chris Gayle was on Tuesday dismissed for 215, which is now the highest individual score in the history of the World Cup cricket tournaments. Gayle was dismissed on the final ball of the West Indies innings against Zimbabwe in the ICC Cricket World Cup 2015 at the Manuka Oval in Canberra. READ: Chris Gayle registers highest World Cup score of 215 vs Zimbabwe

According to AFP,  Gayle, who might have been given out lbw before he had scored, brought up his first double century in 226 one-day internationals off just 138 balls including nine fours and 16 sixes.

The 35-year-old Jamaica left-hander’s innings surpassed the previous World Cup best of 188 not out by South Africa’s Gary Kirsten against the United Arab Emirates at Rawalpindi in 1996.

It was also only the fifth double century in all ODI cricket and the first by a non-Indian, with Rohit Sharma (two), Sachin Tendulkar and Virender Sehwag the only other batsmen to achieve the feat.

Gayle and Marlon Samuels, who scored a century himself, also set a new partnership record for any ODI wicket, surpassing the 331 shared by India’s Rahul Dravid and Tendulkar against New Zealand at Hyderabad (Deccan) in 1999. 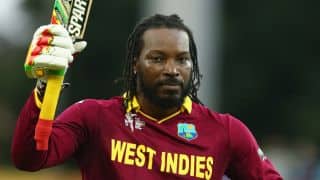