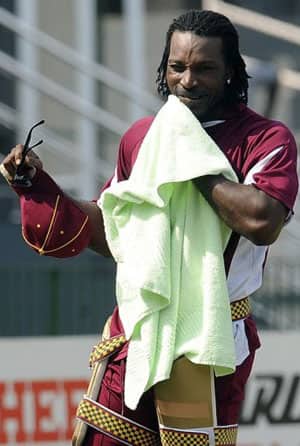 West Indies’ Chris Gayle, seen here playing a shot during their ICC World Cup warm-up ahead of the 2011 Cricket World Cup against Sri Lanka at The R. Premadasa Stadium in Colombo, on February 15. Gayle says he wants to emulate India’s Sachin Tendulkar and notch up one-day cricket’s second double-century at the World Cup.

Gayle, also an attacking opener, believes he can achieve the magical mark if he bats out the 50 overs. “The master-blaster (Sachin Tendulkar) got it. A guy like Sehwag can get it. These are the guys who can get it once they get off to a good start. You bat through the 50 overs and it becomes a possibility,” he said.

“If I get a chance, I’ll definitely chase it,” said Gayle, whose highest score in one-day internationals is the 153 not out he scored against Zimbabwe in 2003.

The left-hander is also keen to polish his all-round skills and contribute to his team with his off-spinners, which have fetched him 156 wickets from 223 ODIs. “I want to be the best all-rounder in the World Cup,” said the 31-year-old. “I should be able to do a bit of bowling and get a few wickets as well and also set up a good total for the team.”

Gayle was realistic of his team’s chances at the showpiece tournament. “The preparation has been good. We came from Sri Lanka, of course things didn’t go according to our plan but at the same time it is a big occasion and we want to get a winning start,” he said.

“The key is to get a good start and in this new format, the top four get to the quarterfinals. That would be our objective and then anything is possible.”

West Indies drew all the three rain-hit Tests in Sri Lanka before losing the following one-day series 2-0. In the World Cup, West Indies have been drawn in Group B alongside Bangladesh, India, England, South Africa, the Netherlands and Ireland.

Their first match is against South Africa at the Feroz Shah Kotla Stadium in New Delhi on Thursday. Gayle said he was hopeful his team will script a turnaround in their fortunes this time.

“We have not done well in the two World Cups that I played and I hope things turn around here. We need to have the self belief. We have to take responsibility. We have to go out there and not just put up a fight but get victories,” he said.