With rains pelting down at Eden Gardens, it seemed that Match 18 of VIVO IPL 2018 between Kolkata Knight Riders (KKR) and Kings XI Punjab (KXIP) was more or less done. Thanks to Chris Gayle and KL Rahul‘s stunning start, KXIP had reached the safe zone of 96 without loss in 8.2 overs when rain stopped play. At that stage they were 31 ahead of the DLS par score. When Gayle and Rahul returned, they made a mockery of the revised target of 125 in 13 overs. KXIP required 29 off 28 at that point.

The KXIP openers swallowed the target easily. Sunil Narine’s over upon return read 6,4,4, before the wicket of Rahul, caught by Tom Curran at deep mid-wicket. Shivam Mavi, erratic with his bowling before the rain, came good with his yorkers and conceded just 3 off his over. Then, with 5 required off 12, Gayle finished the task with a six off Curran’s only ball. En route 125, Rahul got to his second fifty of IPL 2018 off 24 deliveries while Gayle got to his third 2018 IPL fifty off 28. Gayle also claimed the Orange Cap from Virat Kohli.

With this win KXIP have toppled Chennai Super Kings (CSK) to take the top spot of the points table.

If being hammered by Rahul and Gayle was not enough, KKR suffered another blow when Russell pulled his hamstring during his second spell. Russell had already leaked 18 by then. A hamstring injury had ruled him out of PSL as well. Mavi s in-swingers and short-pitched deliveries could not stop the KXIP openers. Narine, who has scalped Gayle twice in IPL, could not rise to the occasion either, barring being the holder of the Purple Cap. The openers took turns to hammer the KKR bowlers.

Earlier, Chris Lynn had anchored the KKR innings with a 41-ball 74. He received support from Dinesh Karthik (43) and Robin Uthappa (34) en route his third IPL fifty. The pick of bowlers was Andrew Tye (2 for 30).

Player of the Match: KL Rahul. 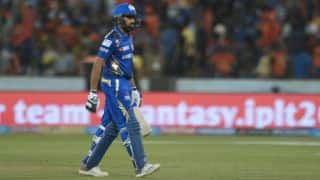