Chris Gayle's score of 215 is now the highest individual score in the history of World Cup cricket.

Chris Gayle, the dangerous batsman from the West Indies on Tuesday became the only cricketer in the history of the sport to score a century in Twenty20 Internationals (T20Is), a double century in One-Day Internationals (ODIs) and a triple century  in Test cricket. Gayle slammed the maiden double ton of World Cup history when he scored 215 against Zimbabwe in ICC Cricket World Cup 2015 tournament match in Canberra. SCORECARD: West Indies vs Zimbabwe ICC Cricket World Cup 2015 at Canberra

Chris Gayle’s score of 215 is now the highest individual score in the history of World Cup cricket tournaments, surpassing the record of former South African Gary Kirsten, who had scored 188 not out against United Arab Emirates (UAE) in the ICC Cricket World Cup 1999.

The West Indian opener Chris Gayle was also involved in a record 372 runs with Marlon Samuels, which is now a world record partnership for any wicket in the history of ODI cricket.

Chris Gayle’s innings was the fifth double century in the history of ODI cricket. The only men who had achieved it earlier are all from India, starting with the legendary Sachin Tendulkar, followed by Virender Sehwag and Rohit Sharma, who has done it twice. 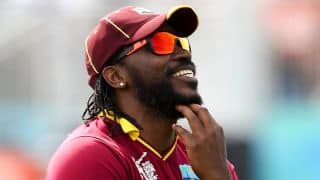