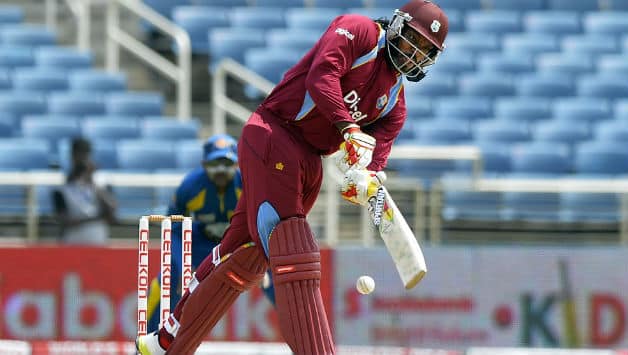 A well-paced century from Chris Gayle helped West Indies register a comprehensive six-wicket victory over Sri Lanka with a bonus point and draw first blood in the tri-series in Kingston. Gayle’s knock of 109 from 100 deliveries, laced with nine fours and seven sixes, came after good bowling performances from Sunil Narine (4 for 40) and Ravi Rampaul (3 for 38) earlier in the day ensured Sri Lanka were restricted to a modest total.

Chasing 209, West Indies had a good start with Gayle and Johnson Charles adding 115 runs for the first wicket, their first ever 100-run partnership in One-Day Internationals (ODI).

Gayle welcomed Nuwan Kulasekara with a crisp drive through the covers to bring up the first boundary of the West Indian innings in the second over. Angelo Mathews threw the ball to Ajantha Mendis in the fifth over, hoping to see him bamboozle the batsmen à la Narine. But, Gayle had other plans. He did not let Mendis settle down and hit him for a big straight six in his second over.

Charles struggled against the seam movement generated by Kulasekara, but Gayle made up for the lack of runs from his partner’s willow by hitting Kulasekara for two sixes and one four in the eighth over. The opening duo brought up their 50-run stand in the 11th over with Charles contributing just six runs to the partnership.

Malinga was the only bowler who came close to unsettling Gayle. He bowled a couple of good yorkers which Gayle effectively dug out. Malinga then tried to surprise Gayle with a short delivery but the latter top-edged it for a six and won that mini battle against the slinger.

Charles began to free his arms with a few boundaries under his belt but tried to hit one too many shots and perished while going after Rangana Herath in the 21st over, with the score on 115. He hit Herath for a six off the first delivery, prompting the bowler to go over the wicket and bowl a legstump line. The move worked as Charles could only find the fielder at long-on after going for another expansive stroke.

Gayle was joined by Darren Bravo in the middle with 94 runs needed from the remaining 30 overs.

Gayle continued to play his shots, and gave Kulasekara a similar welcome like before, hitting him for a boundary off the first delivery in the 21st over. In the following over, he slammed the ball straight past Herath for a boundary and moved into the 90s with a six that crashed into the sightscreen off the very next delivery.

He took some time but eventually got to his century with a quick single in the 28th over. This was Gayle’s 21st ODI ton, his 20th coming in the same venue against New Zealand in 2012.

In his pursuit of finishing the game as soon as possible, Gayle was dismissed in the 31st over when he attempted to sweep a Jeevan Mendis delivery, but could only manage a top-edge which was taken well by Dinesh Chandimal at forward square leg.

Sri Lanka struck again in the next over when a mix up between Darren Bravo and Marlon Samuels led to the former’s dismissal. However, it was too little too late for the visitors with West Indies needing just 18 runs from as many overs.

Kulasekara trapped Kieron Pollard leg before for a duck but there was not enough runs on the board for a dramatic turn around. Skipper Dwayne Bravo and Marlon Samuels finished the game in the 38th over, earning themselves a six-wicket win and a crucial bonus point for achieving the target under 40 overs.