Currently, West Indies are 317 for the loss of a wicket after 46 overs with opener, Chris Gayle batting on 205.

West Indian swashbuckling opener, Chris Gayle registered his highest individual score in One-Day International (ODI) cricket when he scored a double hundred against Zimbabwe in match 15 of the ICC Cricket World Cup 2015 at Manuka Oval in Canberra on Tuesday. His 200 came off  138 deliveries including nine boundaries and 16 sixes along with a strike-rate of 147.48. SCORECARD: West Indies vs Zimbabwe ICC Cricket World Cup 2015 at Canberra

He also becomes the first non-Indian to score a double ton in ODI with Sachin Tendulkar, Virender Sehwag and Rohit Sharma being the other three guys to reach the landmark. This is also the highest individual score by any batsman in the mega event, with the previous best being of Gary Kirsten with a score of 188. Currently, West Indies are 317 for the loss of a wicket after 46 overs with opener, Chris Gayle batting on 205 and Marlon Samuels on 93. Catch live updates of the match between West Indies and Zimbabwe here

Earlier, West Indies won the toss and elected to bat first on a wicket that looked really good to bat on. West Indies made a couple of change in the playing XI as Darren Bravo misses the game with torn hamstring and is replaced by Jonathan Carter, while Sulieman Benn is replaced by Nikita Miller.  READ: Chris Gayle equals Rohit Sharma’s world record of most sixes in an ODI innings 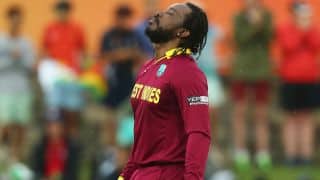