"Chris Gayle came to me before the toss and said he was feeling something in his hamstring," West Indies captain Jason Holder told before 2nd ODI.

West Indies star batsman Chris Gayle was set to spend part of his 38th birthday in a Nottingham hospital after a hamstring injury ruled him out of the second one-day international against England at Trent Bridge on Thursday. The big-hitting Jamaica left-handed opener suffered the injury while warming up and was ruled out shortly before the toss, with Kyle Hope taking his place. A team spokesman later confirmed that Gayle had injured his right hamstring and would be having a hospital scan to assess the extent of the damage. West Indies need Gayle in limited-overs cricket, believes Nasser Hussain

“Chris Gayle came to me before the toss and said he was feeling something in his hamstring,” West Indies captain Jason Holder told BBC Radio’s Test Match Special after he sent England into bat. “Hopefully it’s not something too serious and it’s a precaution. He came to me as I was walking up to the coin so I don’t know the extent of the injury,” the all-rounder added.

Thursday’s fixture was the second of a five-match series that concludes in Southampton a week on Friday. Gayle only recently arrived in Britain for the limited-overs leg of the tour, having missed West Indies’ 2-1 Test series loss to England. He effectively made himself ineligible for selection by not playing first-class cricket in the Caribbean, having become a well-paid globe-trotting star of the Twenty20 game.

Gayle struck a typically dynamic 40 off 21 balls, including three fours and four sixes, as West Indies beat England by 21 runs in the lone Twenty20 of their tour in Durham last Saturday a repeat of their World Twenty20 final win in Kolkata last year. Gayle followed up with a brisk 37 before he holed out in the first ODI at Old Trafford on Tuesday, a match West Indies lost by seven wickets. That defeat meant the two-time former champions could no longer gain direct entry to the 2019 World Cup in Britain and would have to enter a qualifying competition instead.

On the field, only 2.2 overs were possible before rain stopped play at a gloomy Trent Bridge on Thursday. Jonny Bairstow, fresh from his 100 not out a maiden ODI century on Tuesday, was nine not out, with Alex Hales 10 not out on his Nottinghamshire home ground. Rain was still falling more than two hours later, although plenty of hardy spectators, some sheltering beneath umbrellas, remained in the hope of seeing yet more cricket. 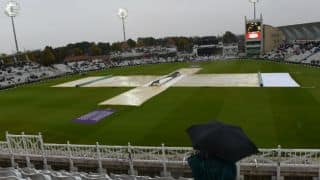