Zimbabwe were off to a slow start as they as they lost opener, Regis Chakabva for a mere couple.

West Indies earned a thumping win over minnows Zimbabwe as they commandingly defeated them by 73 runs in a thrilling high scoring match of the ICC Cricket World Cup 2015 at Manuka Oval in Canberra on Tuesday. This was West Indies’ second win on a trot in the tournament after losing their opening game to Ireland and bouncing back to win their second game against Pakistan. ICC Cricket World Cup 2015: POINTS TABLE

Earlier, West Indies won the toss, elected to bat and posted a mammoth total of 372 for the loss of two wickets. Chris Gayle was the highlight of the innings, scoring a massive 215 off 147 deliveries, while Marlon Samuels remained unbeaten on 133. They also put up an all-time record partnership for any wicket for the score itself. Catch live updates of the match between West Indies and Zimbabwe here

Zimbabwe were off to a slow start as they as they lost opener, Regis Chakabva for a mere couple, trapped leg-before by West Indian skipper, Jason Holder in the second over. With just 15 added to the total, Hamilton Masakadza too made his way back in a similar fashion, this time by Jerome Taylor in the 21st over. Again, with 20 more added to the total, at the score of 46, it was opener, Sikandar Raza who too made his way back following a score of 26. READ: Chris Gayle registers highest-ever World Cup score

However, it was followed by a healthy 80-run stand for the fourth wicket between Brendan Taylor and Sean Williams, before Taylor was dismissed in the 21st over off Samuels for 37. In the meantime, Williams scored his 19th half-century and seemed to be going strong, but fell prey to Holder at the score of 76, while the team’s score read 177 for five. he also put up a 51-run stand for the sixth wicket with Craig Ervine. Live scorecard: West Indies vs Zimbabwe

Out came Stuart Matsikenyeri and along with Ervine put up another healthy 49-run stand. Ervine too scored sixth ODI half-century in the process before being dismissed by Gayle for 52. Following his departure, the Zimbabwe team more or less lost it’s strength as the incoming tail-end batsmen failed to contribute much with the likes of Matsikenyeri, Elton Chigumbura and Tinashe Panyangara, falling for 19, 21 and for respectively. Tendai Chatara was the last man to be dismissed for 16 by Nikita Miller as they ended up getting bowled out for 289. Nevertheless, it was a tough fightback from Zimbabwe. READ: Chris Gayle becomes first non-Indian to score ODI 200 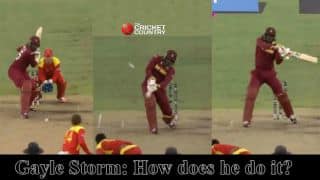