Chairman of selectors Clyde Butts has welcomed Chris Gayle's return to the West Indies team for the one-day tour of England, saying the big-hitting left-hander will bring a "quality dimension" to the Caribbean side. 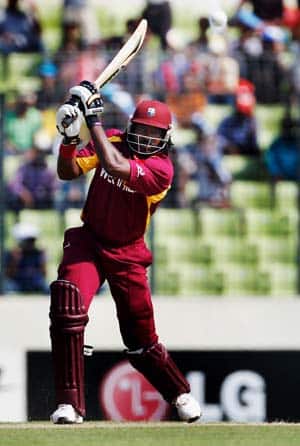 Chairman of selectors Clyde Butts has welcomed Chris Gayle’s return to the West Indies team for the one-day tour of England, saying the big-hitting left-hander will bring a “quality dimension” to the Caribbean side.

The talismanic Gayle was Monday chosen in a 15-man squad, ending a protracted impasse with the West Indies Cricket Board (WICB) that kept him out of the regional side for the last 14 months, reports Caribbean Media Corporation (CMC).

“Chris is a player of proven quality and we are looking forward to him adding the new dimension to the side and his contributions as a senior member of the squad,” Butts said.

The way was paved for Gayle’s return after he sat down in a high-level meeting in St Vincent on Sunday with his representative Michael Hall, WICB president Julian Hunte, WICB director Elson Crick and the Board’s legal officer Alanna Medford.

Gayle, who has scored 8,087 runs from 228 ODIs with 19 centuries, will now join the side led by Darren Sammy and which includes eight members of the squad already in England playing a Test series.

Trinidadian opener Lendl Simmons has also been recalled after recovering from injury while Dwayne Smith has been given the nod in a one-day unit for the first time in over two years.

Butts said the composition of the team reflected the continued preparation for the 2015 World Cup in Australia.

“We are now moving into the next phase of the development of the team as part of building our ODI side for the 2015 World Cup,” said Butts.

“A number of players, who have been exposed to international cricket, have been retained as they have performed well.”

“There is, what we believe, is a balanced combination of young rising players like Sunil Narine in the bowling department and Johnson Charles in the top order of the batting in addition to the well-known senior internationals.”

David Williams reappointed as head coach of Trinidad and Tobago