England captain Alastair Cook said Chris Jordan had bolstered his prospects of making a Test debut against Sri Lanka next week during the recent one-day series against the tourists. Sussex all-rounder Jordan took 12 wickets at under 20 apiece during England’s 3-2 series defeat by Sri Lanka, which ended with Tuesday’s six-wicket loss at Edgbaston, and also made useful lower order runs.

The 25-year-old, an assured fielder as well, has so far played 13 One-Day Internationals (ODIs) for England. However, Barbados-born Jordan has yet to appear in a Test match. But that could all change with England’s selectors meeting on Wednesday ahead of a squad announcement on Thursday for next week’s first of a two-Test series against Sri Lanka at Lord’s.

Asked if anyone had improved their Test chances following the one-day series, Cook told reporters at Edgbaston on Tuesday: “I certainly think Chris Jordan has, the way he’s batted today (Jordan made 30), the way he handled himself in a different situation from just whacking it, he’s bowled really well.

“I think, on all reports, I haven’t seen him bowl with the red ball, he does swing the red ball at a good pace,” Cook added. Tuesday’s match was overshadowed by the row regarding Sri Lanka bowler Sachithra Senanayake’s run out of England’s Jos Buttler after the non-striker had backed up too far.

Cook said a “line had been crossed” but Sri Lanka, who stressed they’d previously warned Buttler, insisted they’d done nothing wrong in effecting what is a legitimate, if rare, form of dismissal under the Laws of Cricket.

But the debate over Buttler’s exit — former Test captains Michael Vaughan (England) and Arjuna Ranatunga (Sri Lanka) said he should have been recalled while ex-England skipper Alec Stewart and current Australia captain Michael Clarke — were happy for it to stand — threatened to obscure another sluggish England batting display.Vaughan, in his Daily Telegraph column, said England’s one-day top four “just do not hit the ball hard enough” and added “all they know is the old school way.” England certainly found boundaries hard to come by at Edgbaston, especially early in their innings, whereas Sri Lanka were 55 without loss in the eighth over.

At Edgbaston, left-handed opener Cook top-scored with 56 that took 85 balls and included a mere three fours in a total of 219 all out, Meanwhile Tuesday also saw Twenty20 specialist Alex Hales press his case for inclusion in the one-day team ahead of next year’s World Cup by blasting his way to 167 off 133 balls for Nottinghamshire against Sussex in the County Championship.

“We were 20 odd runs short on that wicket,” Cook said of England’s total. “In one-day cricket you need to be brave as well. I don’t know whether were brave in our batting today (Tuesday). I do think you have to give Sri Lanka some credit for the way they bowled. They are used to playing on a slow, low wicket.” 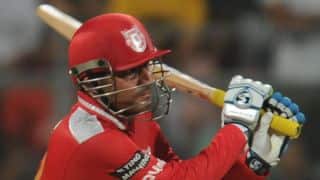 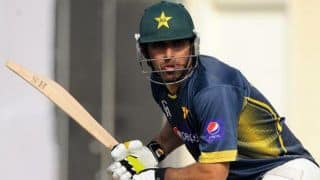