Chris Lynn will make his one-day international debut alongside pace bowler Billy Stanlake in Australia's first ODI against Pakistan in Brisbane on Friday.

Swashbuckling batsman Chris Lynn will make his one-day international debut alongside pace bowler Billy Stanlake in Australia’s first match against Pakistan in Brisbane on Friday. Lynn, who has played five Twenty20 internationals, has lit up Australia’s Big Bash competition this year, hitting 26 sixes in five games, including one 121-metre blast that sailed out of the Gabba, the venue for Friday’s match. “He’s been in red hot form and hopefully he can bring that to the international stage,” Australia captain Steve Smith said in Brisbane on Thursday, while confirming the 26-year-old Lynn had recovered from a neck injury.

“I’ve watched him in the nets in the last couple of days and he’s hit the ball hard … so hopefully he can do the same for us.” The towering Stanlake will join Mitchell Starc and Pat Cummins in the pace attack, with Glenn Maxwell, Mitchell Marsh and James Faulkner filling the all-rounder roles for the first of five one-dayers. Top order batsman Usman Khawaja and leg-spinner Adam Zampa were the players to miss out from the squad named last weekend and Travis Head will open the batting with David Warner. 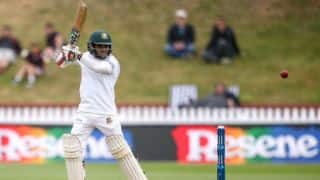