Chris Morris' 32-ball 82 is the highest score by a No. 4 batsmen in Indian Premier League.

Chris Morris’s 32-ball 82 goes in vain as Gujarat Lions (GL) edge out Delhi Daredevils (DD) by 1 run in Match 23 of Indian Premier League (IPL) 2016. Earlier, DD won the toss and elected to bowl. “We’re just following the trend and would look to chase down the target,” said DD captain captain Zaheer Khan during the toss. Zaheer started the proceedings by leaking 18 runs in the first over. GL openers McCullum and Smith grabbed the DD bowlers by their collar and took them to the cleaners. The duo scored fastest 50-run stand of IPL 9 off just 23 balls. They couple meaty blows with cheeky ones and put DD on the back foot. They stitched up 112-run partnership for the first wicket and laid foundation for the middle-order batsman. Live Cricket Scorecard:Delhi Daredevils vs Gujarat Lions, IPL 2016 Match 23 at Delhi

However, DD wrestled back in style as they sent McCullum, Smith and Suresh Raina in quick succession. While McCullum was castled with a peach of slower ball, Raina was hunted down with a well-directed bouncer by Morris. What looked like a one-sided game suddenly turned in DD’s favour. To make matters worse for GL, wily leg-spinner Imran Tahir dismissed dinesh Karthik and debutant Ishan Kishan in consecutive balls. Nonetheless, all-rounder James Faulkner gave finishing touches, as GL posted 172 runs on the scoreboard.

GL bowlers were right on the money and swung the ball both ways. Given this, Quinton de Kock played with caution and put a price on his wicket. However, Sanju Samson showed signs of aggression and holed out to Faulkner at mid on. Both Praveen Kumar and Samson bowled tight spell and kept de Kock’s onslaught at bay. Eventually, de Kock fell prey to Kulkarni’s change of pace and experienced a rare failure. To add to DD’s misfortune, Kulkarni sent Deepak Hooda to the dug out.

Debutant Rishabh Pant looked in ominous touch and spanked 20 off just 17 balls before he middled a length ball straight to the hands of Kumar at deep square leg. The onus was then on the veteran Duminy and Morris to take the team over the time. Duminy started the onslaught by spanking a six and a four in Jadeja’s first over. Then, Morris went berserk and set the roaring Feroz Shah Kotla on fire. He scythed 6 mammoth sixes to bring up his maiden IPL half-century off just 17 balls. He fired on all cylinders and kept clearing the boundary. GL made a good comeback as Bravo outfoxed Duminy with change of pace.

DD needed 18 off 12 balls. Raina introduced the experienced Kumar to put a lid of the runs. Given the momentum Morris was in, the game looked like in DD’s favour. However, Kumar coupled perfect yorkers with wily slower ones and conceded only 4 runs. In the final over of the innings, DD needed 14 runs. And, as expected, T20 stalwart DJ Bravo was into the attack. He fired good low full tosses, which Morris found it hard to put away for 6. However, Negi and Morris ran hard between the wickets and converted ones into twos to bring down the equation to 4 runs off 1 ball. Morris yet again failed to sweetly connect it and fell short by 1 run.

Along with the colossal sixes, records also kept tumbling. Morris” 8-six cameo is the second most by a DD batsmen in IPL (first being Kevin Pietersen with 9 sixes). Moreover, this was the highest score by a No. 4 batsman.

With this win, Gujarat Lions jump at the top of the points table, with Kolkata Knight Riders and Delhi Daredevils at No. 2 and 3 respectively. 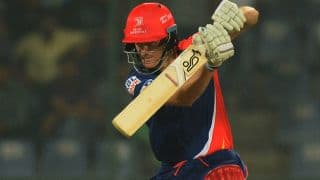