The left-hander scored 43 in an opening partnership of 110 runs with David Warner.

Chris Rogers, the solid partner to David Warner for a century opening stand against Australia on the opening day of the final Ashes Test at The Oval, will exit international cricket after having crossed the 2000-run landmark in Tests. The left-hander has now scored 2013 runs in 25 Tests, with only one possible innings left to make more runs. He negotiated the tough opening spell by the fresh seamers when England inserted his team to bat in seaming conditions, played and missed a few balls, edged seamers to slips that didn’t carry, and forced a few square drives for boundaries. He was eventually out for 43, edging Mark Wood to Alastai Cook in the slips soon after lunch. LIVE CRICKET SCORECARD: England vs Australia, 5th Test, The Oval, Day 1

His opening partner, David Warner, was the more aggressive partner. When Rogers would leave and defend balls incessantly, Warner forced a few fours, mostly in the extra-cover region. He reached his fifty just before lunch, and cracked a fine boundary off Stuart Broad through the off side in the second over in the new session. He looked comfortable to hit two more boundaries, but then departed as he fished for a ball outside off stump and gathered an edge. LIVE CRICKET UPDATES: England vs Australia, 5th Test, The Oval, Day 1

Rogers’ highest Test score, 173, arrived in his final Test series, in the second Test at Lord’s. That match had Australia winning by 405 runs, but they surrendered the Ashes in dramatic fashion by losing the following Tests. 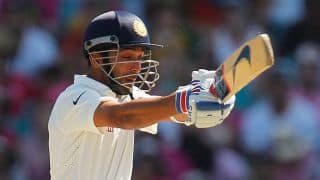