Chris Rogers concussed after getting struck on the helmet by a local bowler.

Chris Rogers is set to be sidelined from the first Test match against West Indies after the Australian opener showed signs of mild concussion due to a blow to the helmet while facing a local net bowler in Dominica. The incident happened on Sunday and Rogers later displayed signs of concussion such as dizzyness and headache.

The call to rule Rogers out from the first Test was taken by team doctor Peter Brukner. The decision is in keeping with Cricket Australia‘s (CA) revised policies on head injuries, which recommends resting a player even in case of the most minor head injury. Brukner spoke with coach Darren Lehmann, skipper Michael Clarke and Rogers himself to convey the decision.

“I assured Michael if it was him or anyone else we would make exactly the same decision,” Brukner said. “This is a black and white rule now. If someone is concussed, they don’t play,” Brukner explained.

Rogers won’t be permitted to return to training until symptoms of the concussion completely vanish; this is expected to happen in the next few days. In most probability, Rogers will be match ready for the second Test, though that can’t be confirmed at this point.

Rogers was struck on the helmet by a local net bowler. After taking some time to compose himself, Rogers played and missed the next delivery much to his own disappointment, which was manifested in the batsman whacking a stump with his bat. He then quit the session and sat pondering for a while. 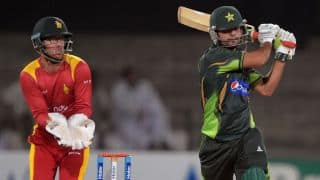