Former England fast bowler Chris Tremlett announced his retirement from all forms of cricket on Friday after struggling to overcome a back problem. Tremlett, 33, starred in England’s 2010-11 Ashes triumph in Australia, taking 17 wickets in three Tests including the series-clinching dismissal of Michael Beer at the Sydney Cricket Ground. In total he played 146 first-class matches for England, Hampshire and Surrey, his latest club, taking 459 wickets at an average of 28.66. “After sixteen enjoyable years in a game that has given me so much I feel that now is the right moment to call time on my playing career,” Tremlett said in a statement on the Surrey website. READ: Kevin Pietersen’s England chances boosted after Paul Downton sacking, believes Chris Tremlett

“I have been extremely fortunate to have enjoyed such a fantastic and memorable career and lucky enough to play with and against some of the best players in the world. Wearing the Three Lions was the pinnacle and I enjoyed every minute of the challenge, experience and ultimately the success that the team had whilst playing for England.

Surrey director of cricket Alec Stewart said: “Trem has been a valued and popular member of the playing staff throughout his time with us. “On behalf of everyone at the club I would like to thank him for his efforts and contributions, both with Surrey and England, and wish him well in the next chapter of his career.” 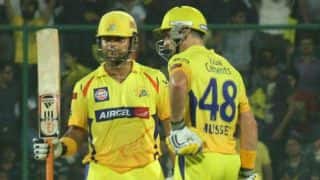