Towering paceman Chris Tremlett will get an early chance to press for an Ashes 2013-14 Test place as England open their tour Down Under against a Western Australia Chairman's XI in Perth on Thursday. 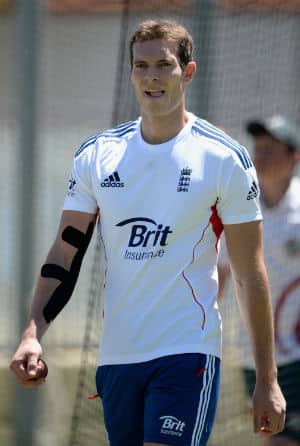 Towering paceman Chris Tremlett will get an early chance to press for an Ashes 2013-14 Test place as England open their tour Down Under against a Western Australia Chairman’s XI in Perth on Thursday.

Captain Alastair Cook says a place is up for grabs in England’s pace attack behind first-choice quicks Jimmy Anderson and Stuart Broad and has given the incentive to Tremlett, Steven Finn and Boyd Rankin to go after it.

Broad has a back complaint and was left out of the three-day tour opener, which will give coach Andy Flower the chance to see all three of England’s giant fast bowlers go head to head.

Cook, also troubled by a back complaint, will miss out on the tour opener along with Kevin Pietersen and Graeme Swann with England to be led by wicketkeeper Matt Prior.

Pietersen has been given more time to acclimatise to Australian conditions after linking up late with the team, while spinner Swann has also been given a rest.

Tremlett has had past success bowling on Australian wickets and proved a handful, taking 17 wickets in three Tests on England’s last tour Down Under three years ago.

“The first week or so everyone is a little tentative and going through the gears,” the Surrey bowler said.

“But when I go into the warm-up games and Test matches, I’ll be throwing myself into it and not holding back because I want to give myself the best chance of playing in the first Test.”

England have three tour matches in the build-up to the opening Ashes Test at Brisbane’s Gabba Ground on November 21.

Pietersen only arrived in Australia on Sunday after being given compassionate leave following the death of a friend.

Prior said the 33-year-old was in good spirits and ready to fire for the five-Test series.

“It was a tough time for Kevin, but he’s a tough character,” Prior said. “He’s able to ditch things pretty quickly and move on. You can already see in the way he’s preparing, you can see mentally he’s getting into it and switching on for a big series.”

Batsman Ian Bell, who played a key role in England’s 3-0 Ashes 2013 series triumph against Australia in July-August, scoring three centuries to end with an average of 62.44, says he is not dwelling on past successes.

“It certainly doesn’t change your appetite for runs and success,” Bell said. “You want to come out here and play the best cricket you can.

“Whatever’s gone now has gone, and this series is the most important.”

Conflicting scheduling means that England will face a second-string WA XI, with the main state side involved in a domestic Sheffield Shield game against Victoria in Melbourne at the same time and other leading players in India with the Australian one-day side.

Two-Test spinner Michael Beer will captain the local team in the absence of Adam Voges, Nathan Coulter-Nile and Mitchell Johnson, while Queensland’s Chris Lynn has been drafted in to bolster the side.