Rhodes is preparing his side to face New Zealand at the Oval on Wednesday after they beat South Africa in their opening World Cup match.

Bangladesh coach Steve Rhodes spoke of his respect for the way his players handled themselves after the Christchurch mosque attacks earlier this year.

The team narrowly escaped the attacks that killed 51 people in New Zealand in March during their tour of the country.

Rhodes is preparing his side to face New Zealand at the Oval on Wednesday after they beat South Africa in their opening World Cup match.

“They are just celebrating Eid now, the end of Ramadan. That’s been tough for many of the boys.

“There’s a lot of smiley faces at the moment, and going back to that day in Christchurch, I was thinking, how do we get a team back together after,” he added. “But they have done it.” Rhodes said Bangladesh did not want to get carried away with their victory against South Africa.

“We know the people back home are delighted and obviously jumping up and down with what we’ve done in beating South Africa,” he said.

“But the team and the staff, they know that the task is going to be tough against some of these teams, and New Zealand are just one of those sides where they gave us a decent hiding this winter, and we’re hopeful that we are in better shape.

“The answer is, we are in better shape, taking them on this time around. But they are a tough opposition, like many of the top four or five teams in the world, and it will be difficult.” 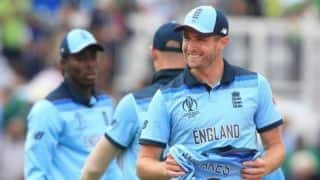