Few Indian cricketers as well wished the fans through their twitter accounts.

As the big day of the year-end arrived on Dec 25, 2014; cricketers from all around the world took on the twitter world to express their best wishes to the fans for this year’s Christmas and for the upcoming new year.

Cricketers like Glenn Maxwell, Craig Kieswetter, Denesh Ramdin, David Warner and many more wished all their fans a joyful Christmas along with their celebrations as well. Few Indian cricketers as well wished the fans through their twitter accounts. With the tour Down Under going through a tough time for the Indians as they find themselves down 2-0 in the four-match series, they still didn’t back out to celebrate on the big occasion.

Following are few of the tweets:

Hope everyone is having a great Christmas! Had a special guest show up at my family get together… @danmax1979 pic.twitter.com/AgncDHghKg 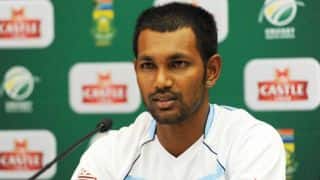