Kolkata Knight Riders kept their chances of qualifying for the semi-finals alive by comfortably beating Royal Challengers Bangalore by 9 wickets in a Champions League Twenty20 match. 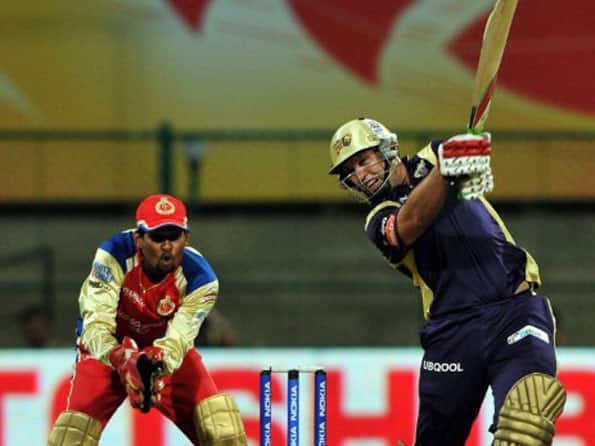 Kolkata Knight Riders kept their chances of qualifying for the semi-finals alive by comfortably beating Royal Challengers Bangalore by 9 wickets in a Champions League Twenty20 match.

Chasing a challenging target of 170, the KKR top-order batted beautifully to knock off the runs in only 17.3 overs.

The most heartening fact was skipper Gautam Gambhir’s return to form as he clobbered the RCB bowlers to score an unbeaten 55 off 31 balls (3×4, 4×6) and added 109 runs with the ever-consistent Jacques Kallis for the undefeated second wicket. Kallis scored another fluent half century remaining undefeated on 64 in 47 balls with four boundaries and six.

Brad Haddin who played his first match blasted his way to a 27-ball 42 and released the initial pressure as Jacques Kallis also started playing shots at the other end.

Haddin was in a mood to spoil the party for young left-arm seamer Sreenath Aravind who was selected to play for India, was tonked for 19 runs in one over including two huge sixes and a four.

The duo added 62 runs in 7.1 overs before RCB skipper Daniel Vettori tossed one up and Haddin gave a simple catch to Virat Kohli in the covers.

In walked skipper Gautam Gambhir and looked far more determined than what he had looked in recent months. He concentrated hard, ran the singles and twos well and also hit a few crisp boundaries. Gambhir-Kallis added 50 runs in only 31 balls to lay the foundation of an impressive victory.

The best part was sixes that Gambhir hit. One was off Vettori over deep mid-wicket while the next one was straight over Dirk Nannes’ head over long. Just to make a point he moved towards off-stump and lifted Nannes over deep fine leg to complete his 50 off 30 balls.