Chennai Super Kings beat Brisbane Heat by eight wickets in the Champions League Twenty20 (CLT20) 2013 at Ranchi on Saturday to ensure their entry in the semi-final. Chennai have won three games on the trot and are looking unbeatable at this point. 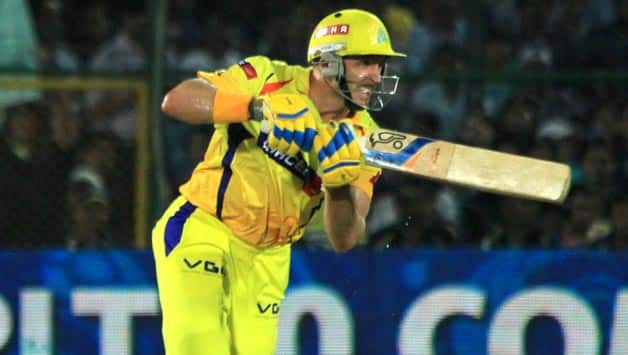 Chennai Super Kings beat Brisbane Heat by eight wickets in the Champions League Twenty20 (CLT20) 2013 at Ranchi on Saturday to ensure their entry in the semi-final. Chennai have won three games on the trot and are looking unbeatable at this point.

The opening partnership of 75 between Michael Hussey (57 not out) and Murali Vijay (42) set the foundation for an easy run-chase. Vijay had had scored two ducks in the first two games. On Saturday, he played in his usual aggressive manner thus vindicating the faith of the team management in him. He got into his groove hitting Cameron Gannon for two boundaries in the third over. The first set of powerplay overs yielded 37.

Vijay then attacked Nathan Lyon, who was battling to grip the ball courtesy of the dew, right from the outset. The full-toss was deposited over mid-wicket while the fifth delivery of the over was hit over long-on to help Chennai’s cause.

Vijay fell for 42 off 27 deliveries trying to hook Cutting but ended up offering a catch to Joe Burns at long-leg.

Hussey played a measured knock and he was busy ticking the scorecard. Raina played a couple of lusty blows to bring the required run-rate below six runs per over. The feature of Raina’s batting was a six over mid-wicket off Cutting and a authoritative pull over square-leg. Raina was dismissed trying to work Daniel Christian towards on-side but he missed the ball. Brisbane were going through the motions as the breakthrough was a tad too late.

Chennai spinners put a stranglehold on Brisbane Heat batsman who failed to get the ball off the square. The first set of powerplay overs yielded 54 runs for the loss of openers — Dominic Michael who fell trying to smash Mohit Sharma in the first over of the game. He was caught at covers. Captain James Hopes tried to clear Morkel over mid-off but he failed to clear Jason Holder’s outstretched hands.

In the next 10 overs spinners dictated the terms and gave away 25 runs and picked up four scalps. Ravindra Jadeja, who had conceded 72 runs off his four overs so far in CLT20 2013, picked up a wicket of his first delivery. Daniel Christian tried to go after Jadeja right from the outset but he managed to get the elevation and not the distance as he was caught at long-on. Joe Burns was dismissed four balls hence edging Jadeja to the first slip. From there on Brisbane went into their shell and wickets pegged them back considerably. Chris Lynn was hoodwinked by Ravichandran Ashwin’s leg-spinner. The ball took the outside edge and flew to gully. Heats were precariously placed at 61 for five at the half-way stage.

Chris Hartley and Ben Cutting stitched together 71 off 45 deliveries and they scored 50 off the last three overs. Mohit went for 23 off the final over of the innings. The score of 137 looked competitive but Chennai batsmen looked comfortable chasing the total.

Hussey brought up his fifty and hardly gave the Australian outfit any chance. MS Dhoni walked in to bat at No. 4 much to the delight of the Ranchi crowd. He remained unbeaten and guess what he finished the game by smashing a six off Cutiing. Chennai’s dominating day got the icing on the cake as they booked their place in the semi-final.

(Sarang Bhalerao hails from a family of doctors, but did his engineering. He then dumped a career in IT with Infosys to follow his heart and passion and became a writer with CricketCountry. A voracious reader, Sarang aspires to beat Google with his knowledge of the game! You can follow him on Twitter here