Keen to get into winning ways, qualifiers Sunrisers Hyderabad would not be taking a fired up Trinidad and Tobago lightly when the two sides square off in their Group B clash of the Champions League Twenty20 at Mohali on Tuesday. 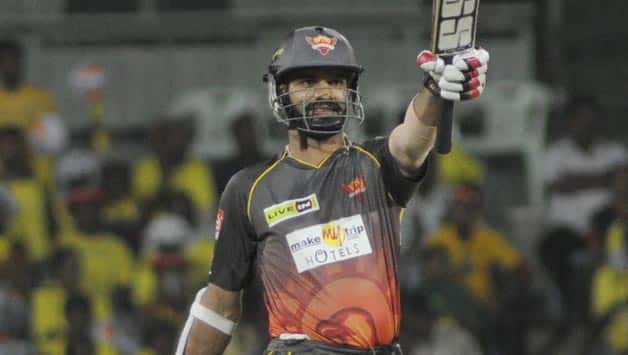 Keen to get into winning ways, qualifiers Sunrisers Hyderabad would not be taking a fired up Trinidad and Tobago lightly when the two sides square off in their Group B clash of the Champions League Twenty20 at Mohali on Tuesday.

The Sunrisers, who lost their final qualification tie, would be looking to put their best foot forward against the Caribbean side whose confidence would be sky high after successfully defending a low total against Brisbane Heats in their opening group match on Sunday.

The experience of playing at the Mohali’s PCA track in the qualifiers would help the Sunrisers in their pursuit to get off to a strong start in the group.

Skipper Shikhar Dhawan looked in ominous touch in the qualifiers and would be expected to bat for as many overs as possible and pile up the runs, while all-rounder Thisara Perera would be banked upon to provide the impetuous.

The Hyderabad franchise is expected to field the same team with overseas players JP Duminy, Cameron White and Darren Sammy forming the crust of their middle order.

The Sunrisers possess a very incisive bowling attack, one with lots of variety. While Steyn and Sharma would be expected to bowl fast and rattle the T&T top order, spinners like Mishra, Karan Sharma and Duminy offer a lot of options to the skipper in the middle overs.

On paper, the Sunrisers look a far stronger unit but they would be wary of the inaugural edition finalist’s ability on sprang up surprises with their combative team spirit.

The Islanders will aim to uphold the momentum and seek to emulate their performance in the inaugural season when they took the tournament by storm by reaching the final in 2009.

For T&T, their bowling is their strength, led by pacer Ravi Rampaul and mystery spinner Sunil Narine, who delivered the goods at Ranchi by taking six wickets between them.

Rampaul was terrific both at the start as well as the latter part of the innings to help script a 25-run victory for his side, while Narine was at its deceptive best.

The T&T camp would be hoping for another disciplined show from their bowlers at the Punjab Cricket Association stadium where the wicket is likely to produce a run feast.

However, their batting looked unsteady in Ranchi with only skipper Denesh Ramdin getting some runs under his belt.

The likes of Lendl Simmons, Darren Bravo and Sherwin Ganga would be hoping to make significant contributions in the upcoming match.