The CSK skipper's comments were made after the side's 13-run win against Perth Scorchers.

After their 13-run win over Perth Scorchers in the 15th match of the Champions League Twenty20 (CLT20), Chennai Super Kings (CSK) skipper Mahendra Singh Dhoni said his team will need to adapt and assess the conditions better in the coming games.

Ravichandran Ashwin then shone with the ball, returning impressive figures of three for 20 to restrict the Scorchers to 142 for seven in 20 overs.

“We made a mistake, how we started. Our intent was good, we went with a positive attitude, but we needed to assess the pitch. We went too hard at the ball,” Dhoni said at the post-match presentation ceremony.

“After that (Mithun) Manhas and (Dwayne) Bravo gave us a crucial partnership. Jadeja’s hitting, the way he went after Hogg who was tough to hit, was very crucial. His innings changed the course of the match. It was important to rotate the strike, he is a talented player and can hit the big sixes,” he added.

Dhoni was happy with the way his bowlers performed. “We improved today, but we lacked in the batting. We didn’t adapt to the wicket, and play for what the par score here is. The bowling performance was fantastic. It was important not to give too many in the first six overs.”

Man of the Match Jadeja said he had backed himself to perform under pressure.

“I was just being myself when I batted, I was just backing myself. The wicket was not easy to bat on. We were just thinking one or two overs could change the game. We just backed ourselves. There was dew for the last four-five overs. We are waiting for our next match and let’s see what happens,” Jadeja said.

Scorchers captain Adam Voges believed the Dhoni-Jadeja partnership took the game away from his team.

“Last three overs of their batting innings, Dhoni and Jadeja took the game away from us. We bowled really well until that point, but they were unbelievable, and we ended up chasing 20-30 more than we should have. Hoggy (Brad Hogg) bowled beautifully, as did the others, but Dhoni did what he does best,” Voges said. 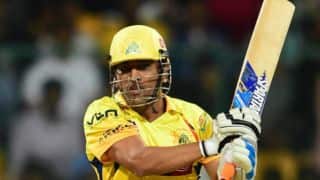 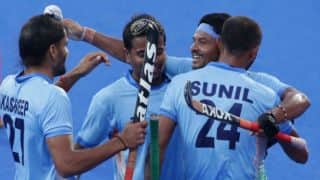