Chennai had lost three early wickets. Brendon McCullum, Suresh Raina and Dwayne Smith. Since then Bravo and Manhas have tried to guide Chennai, against an inspired Perth attack. Brad Hogg has also come into the attack now. Click here for the live blog of the CLT20 2014 match between Perth Scorchers and the Chennai Super Kings 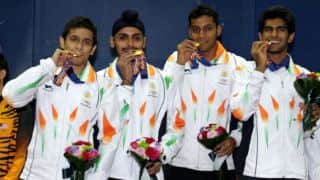