Cape Cobras were being led by Richard Levi in their innings against the Kings XI Punjab in their Champions League T20 (CLT20) 2014 match at Mohali. But that changed after Maxwell took a good catch in the 13th over to get rid of him. In 13 overs, they are 105 for three. Levi wass batting and guiding the innings after the fall of Hashim Amla, who smashed a cracking 40 runs. Click here for the live blog of the CLT20 2014 match between Kings XI Punjab and the Cape Cobras

Glenn Maxwell came in to bowl the 13th over and he was hit for a six by Levi over mid-wicket to bring up the 100 for the Cobras. They are looking to put up a very good score. 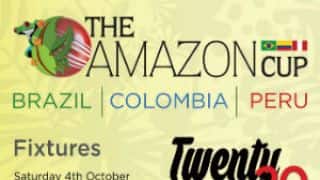