CLT20 2014: KXIP's Thisara Perera feels it's good to have variations in bowling

CLT20 2014: KXIP's Thisara Perera feels it's good to have variations in bowling

Perera admits that T20 is a batsman dominated game and a bowler has to put in extra efforts.

Admitting that T20 is a game where bowlers often find themselves at the receiving end, Sri Lankan all-rounder Thisara Perera feels that its good to have a few variations in order to surprise the batsmen. The 25-year-old Perera, who has been the pick of the bowlers for Kings XI Punjab team in the ongoing Champions League T20 tournament, said that having change-ups helped him leave the batsmen guessing.

“I am using lot of variations in my bowling technique. When someone hits a six, I like to bowl yorkers. I have lot of variations may be a slow ball and a leg cutter, I think I am quite successful with my variations,” Perera added.

In the ongoing CLT20, KXIP have so far won both of their opening games against Hobart Hurricanes and Barbados Tridents played at Mohali. In both the games, Perera has impressed with his bowling, returning figures of 3-0-17-2 against Hurricanes, in which he also contributed with the bat, and 3-0-15-2 bowling figures in the game against the Tridents. Among the upcoming games, KXIP now faces Northern Districts and Cape Cobras at Mohali on Friday and Sunday. 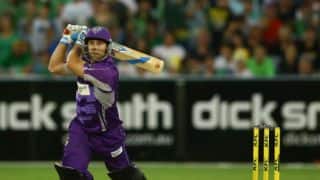