Mumbai Indians have to beat Northern Knights to qualify for the main draw of CLT20 2014.

Michael Hussey, the Mumbai Indians opening batsman, is ready ahead of their crucial Champions League T20 (CLT20) 2014 clash against the Northern Knights on Tuesday, but they would have to field better. Mumbai Indians have to win this game to have any chance of going through. If Lahore Lions lose earlier in the day, then Mumbai have to win to get through. If Lahore win, then Mumbai will have the net run-rate situation coming into play.

Speaking to CLT20.com, Hussey said, “It is going to be a great match. They are a fantastic team who are playing confident cricket and that’s important in T20. We need to win to go through to the next round. So it is going to be a crack-a-jack of a game and I am looking forward to it. We can field better.”

Speaking about Rohit Sharma’s absence due to injury, Hussey said, “Losing Rohit is a huge loss. He is such a class player and he was our captain. So it’s a huge hole to fill. But it gives an opportunity to a young player. Jalaj [Saxena] has come in and done a good job. It is a great opportunity for him to shine and show how good he is.  My job is to try and get the team off to a good start and then offer some experience in the dressing room to some of the younger players and try and keep them relaxed.”

During the match against Southern Express, Hussey had a huge opening stand with Lendl Simmons, which assured Mumbai of the victory to keep them alive in the CLT20 2014. When asked about the conversations he had with Simmons in the middle, Hussey said, “I was talking about all kinds of things really — about what we thought, should I go hard at a certain bowler, about working the singles and twos. Generally speaking, it was mainly positive talk and to keep each other going and to keep building the partnership.”

The last day of the qualifiers would be on Tuesday. Northern Knights are almost assured of their berth in the main draw. It would mainly be Lahore and Mumbai who would fight for the second spot. Mumbai’s big win over Southern Express has given their net run-rate a huge boost. On the other hand, Lahore’s net run-rate has taken a blow after its big defeat to the Northern Knights. The main draw of the CLT20 2014 begins on September 17. 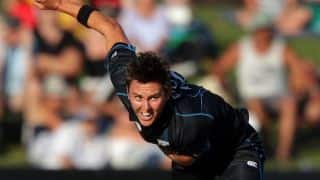