Dolphins are already out of the semifinal race having lost all three matches so far in the competition.

Beleaguered Dolphins will play for pride when they take on a mighty Kolkata Knight Riders in the Champions League Twenty20 tournament at the Rajiv Gandhi International Cricket stadium on Monday.

Dolphins are already out of the semifinal race having lost all three matches so far in the competition. The final nail in the coffin came when they were beaten by Lahore Lions in Bangalore.

In contrast, the Knight Riders, defending champions of the IPL T20 tournament this year, are on a roll after registering 12 wins in a row.

Noting that his team has not been precise in different areas during the CLT20, Dolphins coach Lance Klusener said the side has not played as a team during the event.

The South African outfit has not been consistent during the event though few players like Robbie Frylinck have been impressive. Frylinck was scintillating in the match against Lahore Lions with his 27-ball 63 (4×4, 6×6). Even Khayelihle Zondo’s unbeaten 63 went in vain against Perth Scorchers.

The Knight Riders look invincible at the moment with captain Gautam Gambhir, Robin Uthappa, Yusuf Pathan, Ryan ten Doeschate, Andre Russel and young Suryakumar Yadav in fine form with the bat. Their batting has got a further boost with Jacques Kallis resuming in the last match after he recovered from a problem in the neck.

The bowling department of the Kolkata side looks equally dangerous with “mystery spinner” Sunil Narine, Kuldeep Yadav and Piyush Chawla giving nightmares to the rival batsmen. 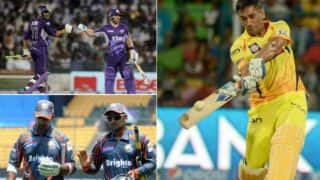