Hurricanes produced a commanding performance to beat the Knights by 86 runs.

Hobart Hurricanes skipper Tim Paine was full of praise for his bowlers and batsmen and said it was a complete team effort that earned the Australian side comfortable 86-run win over Northern Knights in a Champions League T20 (CLT20) match, on Wednesday.

The Hurricanes produced a commanding performance to beat the Knights by 86 runs in a Group B match to keep their hopes afloat in Twenty20 event. And Paine was full of praise for his bowlers and batsmen.

“I can’t fault that bowling effort. It was as good as we’ve bowled for some time. I thought Shoaib [Malik] and Aiden [Blizzard] played really well to get us out of a disastrous start. When I got out we were probably looking at 15-0-160,” he said at the post-match presentation ceremony.

“I thought if we could take early wickets against them, some of their guys haven’t batted much in the qualifiers or their first game, so we thought we might get them under pressure,” he added.

Losing team captain Daniel Flynn said their game plan just didn’t work on the day. “The way those guys (openers) have been playing, we just backed them to pull off their game plans, it didn’t just work for us today. We’ve got another big game in a couple of days and we look forward to that,” he said.

Man-of-the-match Ben Hilfenhaus, who rocked Knights’s chase by picking up three wickets for 14 runs, credited Aiden Blizzard and Shoaib Malik for the setting up the platform for the bowlers to have a go at the Knights batsmen.

“I think it was very well set up by Blizzard and Malik. Fantastic effort, gave us bowlers a pretty good chance,” he said.

“It’s quite funny, I thought it came out better the other day but I was hit everywhere. There was a bit of movement and assistance, and it was good to get the overs out of the way and not get tapped around at the end.” 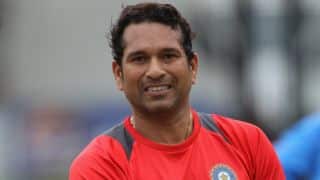