Rahul is now part of the India ODI squad which is locked in a battle with Australia while Pandya is nursing a back injury.

New Delhi: BCCI Ombudsman DK Jain on Tuesday said the Committee of Administrators (CoA) is yet to refer him the matter involving India cricketers Hardik Pandya and KL Rahul, who are facing an inquiry over their sexist remarks during a TV show.

The Supreme Court had appointed its former judge Jain as the BCCI Ombudsman last month to resolve disputes. Jain took charge at the BCCI headquarters in Mumbai, earlier this month.

“I have not taken up any matter Suo Motu for now. Once the CoA refers a case to me, I will take it up,” Jain told PTI when asked about the case involving Rahul and Pandya.

The Vinod Rai-led CoA, after consulting amicus curiae PS Narsimha, had decided to lift the suspension on Rahul and Pandya in January, pending an inquiry. At that time, the BCCI did not have an Ombudsman.

Both Pandya and Rahul were sent home from Australia after their loose comments on a popular chat show triggered a massive controversy, leading to their provisional suspension.

After their provisional suspensions were revoked, Pandya joined the team in the middle of the New Zealand tour while Rahul, who had a disastrous tour of Australia, was told to play the home A series against England Lions.

Rahul is now part of the India ODI squad which is locked in a battle with Australia while Pandya is nursing a back injury. It remains to be seen what action the BCCI will take against the cricketers, if at all. 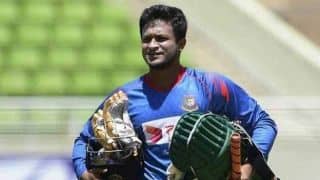