Livid with the conflict of interest allegation against him, VVS Laxman has lambasted the Committee of Administrators' handling of the Cricket Advisory Committee.

Livid with the conflict of interest allegation against him, former India batsman VVS Laxman has lambasted the Committee of Administrators’ handling of the Cricket Advisory Committee, alleging complete lack of communication from the Vinod Rai-led panel.

Laxman said the CoA has been using the CAC only for selection of senior national coaches despite promising a broader role earlier.

Not known to be the most aggressive off the field, the stylish Hyderabadi, in his official response to Ombudsman-cum-Ethics-Officer, gave a rather aggressive rebuttal on the allegations of ‘Conflict of Interest’ while concluding that he is ready to “recuse” if found conflicted.

“On December 7, 2018, we had written to the the Committee of Administrators requesting them to clarify the scope of our role and responsibilities. To this date, there has been no reply. Since no tenure had been mentioned in the letter of intent issued in 2015, it was only reasonable to expect some communication on whether the CAC was still in existence. Unfortunately that hasn’t been forthcoming,” Laxman wrote in his affidavit filed through his lawyer.

“It will be worthwhile to note that the reason I agreed to be a member was because of the various inputs we were originally tasked with contributing towards the sustained growth of Indian cricket,” he wrote in his reply.

“The opportunity to be involved meaningfully in India’s climb towards becoming a cricketing superpower post retirement was privilege enough for me to turn down the offer of remuneration of being a part of CAC,” Laxman said in his affidavit, point 3 (c).

“The allegation of the complainant are baseless as we are in no manner selectors of either players or coaches and CAC is not a permanent body,” he wrote.

The pertinent points were 3 (d) and (e) where he criticised the COA, insisting that the body was never really forthcoming on the scope and role of CAC.

Laxman said the roles of the CAC as told to him in 2015 included focussing on improving performances of the national team overseas, creating a pathway to track a young cricketer’s career from U-19 to India A to the international team,… ODIs and Test cricket for the country’s top players, managing workload for fast bowlers, means to improve the quality of Indian spinners, and education and life-skills for young cricketers.

Laxman said no such input was ever sought by the BCCI.

“…none of the CAC members has (sic) been called on to give our opinion on any subjects except to be invited to be involved in the selection of national coaches and, once, the selection of junior national selectors. However, this is by no means a regular process and I am in no manner to be considered a selector.”

Laxman also claimed that the COA did not even give the three-member committee — the third member being Sourav Ganguly — enough time to confirm availability to select the women’s head coach.

“In December 2018, we were given a little over 24 hours to confirm our availability to be on the panel to select the India women’s head coach. All three of us expressed our inability to participate in the process due to short notice and prior commitments,” Laxman said.

Laxman urged the Ombudsman to view the “Conflict of Interest clause from the perspective of whether in the performance of my duties as a CAC member, I am being influenced by external factors.”

“It is my respectful submission that when I am barely required to discharge any duties as a member of the CAC, which I wasn’t even sure existed due to the lack of communication until I received this notice, questions of any conflict of interest doesn’t arise,” wrote the veteran of 134 Tests and 8781 runs. 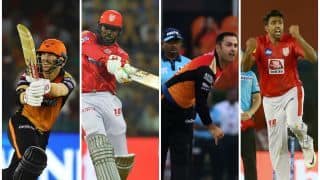 Today's Best Pick 11 for Dream11, My Team11 and Dotball - Here are the best pick for Today's match between SRH and KXIP at 8pm